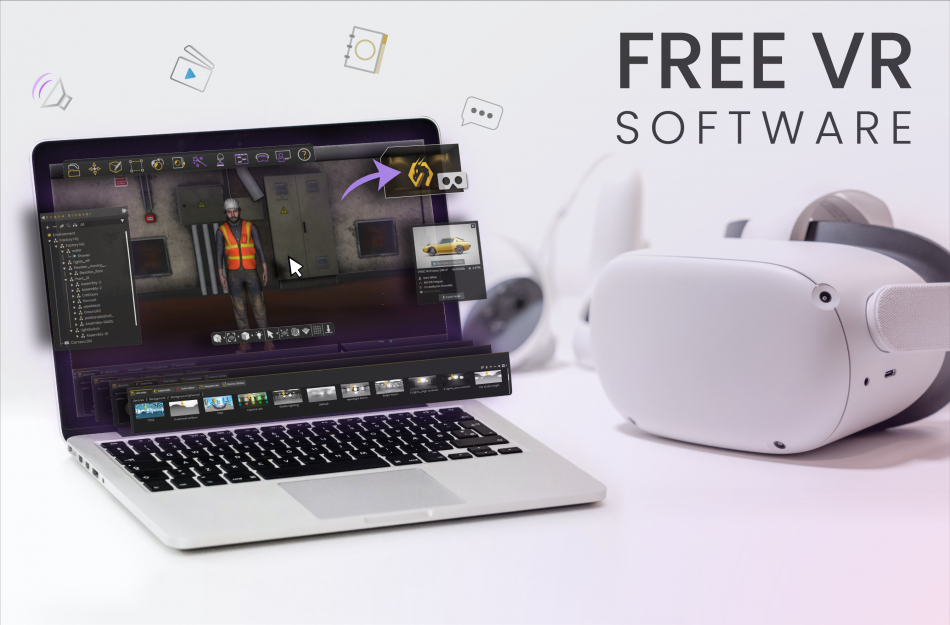 Technology is evolving faster with time. In recent years, we’ve seen the emergence of smartphones, smart homes, drones, smart cars and now even artificial intelligence being a solution to some of our most pressing challenges.

Among those hundreds of new and promising technologies, without any doubt VR is taking the lead now. the beauty of the VR that it suits many types of purposes. It is mostly used nowadays for entertainment however it’s entering a lot of industries and markets, its being used for its safety in industrial training, for its accessibility in space training, in architecture visualization, products and concept design, anatomy, and much more. its a safe and risk free, affordable, limitless and available on the spot.

VR Hardware is being stable and reaching a great level, however software wasn’t really clear. How to create VR content? How to share VR experiences with others? How to run it on different VR devices? How much does it cost to create a VR experience?

Before breaking this apart, the simple answer for all those questions is that it can be done for free and with ease.

The legacy method of creating VR is kind complicated and hard which is mainly using one of the two giant platforms; Unity or Unreal Engine. But is it the smart way!

Those platforms are so sophisticated and their actual purposes is to build full apps for different platforms. You don’t build a photo editor to edit a photo, and you don’t build a VR APP to create a VR experience. The right way is to use a dedicated VR creation software. A problem you will face that you will find so many apps claims VR however they are limited of features and most of them are just 360 viewers. Here it comes the SimLab VR Studio, a software that has been built for creating all types of interactive 3D VR experiences. A great thing SimLab made with the VR Studio is making the FREE version of it not missing any feature, it has all the tools for creating VR experiences without compromises.

The way SimLab VR Studio was build for VR is like how Maya was build for 3D Visualization. It has all the basic and advanced tools for creating anything you imagine into a VR experience. You can literally create an interactive VR experience with animations, visual effects, and much more in few minutes and without any coding. And if you think that it can be limited any other software, It is not. It has the Training Builder tool which open limitless possibilities for interactivity and logic , learn more.

SimLab didn’t stop there, since the goal of a VR experience is to be experienced very well, they have developed a free VR Viewer for all major platforms that can be connected to the cloud so you have all your VR experiences synced on all devices.

Here are the list of the most important features that makes SimLab VR Studio outstanding in the competition.

the SimLab VR Studio is a visual tool that changes the creation of an interactive 3D VR experience from a programmatic process into design and creativity.

You will find all the tools you might think of that can be used and added to your VR experience; Materials management, Geometry Optimization, Animation creation and control, VR hands and gadgets customization, visual effects, VR behavior and interactions, state management and much more.

SimLab VR Studio supports an enormous amount of 3D/CAD formats. at the moment of this article, more than 30 formats are supported including general purpose formats such as (obj, 3ds, dae, fbx, dwf, …..), Industrial formats such as (Inventor, Rhino, SolidWorks, Parasolid, Solid Edge, …..), VR formats (gltf, usdz, pointcloud, …..) and much more. See all formats at the official supported formats page.

SimLab Soft team have added large amount of ready to use VR assets including materials, lights, 3D models, interactive models, HDRs, Environments, and ready VR scenes. more than that they have integrated with Sketchfab to provide a direct access for all of their Free 3D models directly inside VR studio. You just search for a model or assets and simply drag it into your scene.

SImLab VR Studio is not a simply processed Environment, Its a world and Scene builder tool that gives you the flexibility to add, remove or modify anything in the VR scene anytime. It has one great feature called Scene States, those scene states can be used for several purposes. During building the VR experience, you can use the scene states to capture states at specific moments for some objects materials, transformation, visibility and more. at any time you can jump back and forward between those different states in the scene.

When you open a new scene in SimLab VR Studio, its actually a ready VR experience that is on click away from being ran on your PC or VR headset. so at any moment of your work you can click export/Share and your VR experience is ready.

The Training builder is the strongest feature in the VR Studio. Yes, you can create interactive massive 3D VR scenes without the training builder. But with it, you can literally interact with objects events, scene events, time, environment and much more. Its a visual diagram where you can drag and drop those events and responses, and connect them with the logic you want to achieve desired behavior in the scene. With it you can create dependencies, achievements, and more.

The FREE VR Studio is easy to learn, it won’t take much time from you to get used to it, it will not also take from your pocket. So no worries in creating and viewing VR experiences, its all covered in the FREE edition of the VR Studio. Even the advanced features in VR offered by SimLab Soft, they are low in prices and affordable for all users.